View of an open Leslie cabinet: 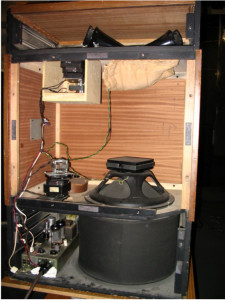 The concepts and methods explained in the paper allows for simulation of the Leslie cabinet. The Leslie cabinet consists in two rotating sound sources placed in an enclosure. The input signal of the Leslie is divided into a low-frequency part, sent to a woofer, and a high-frequency part, driving a rotating horn. The woofer is connected to a rotating drum. This system was originally designed to add choral effect to Hammond organs.

We have used the Max-MSP abstractions described HERE to build a Leslie simulator.

This simulator is made of two parts : the woofer and the horn part. Both are build with the same scheme : a moving sound source giving the direct sound, and a set of moving sound sources for the images sources, as shown on the figure below. 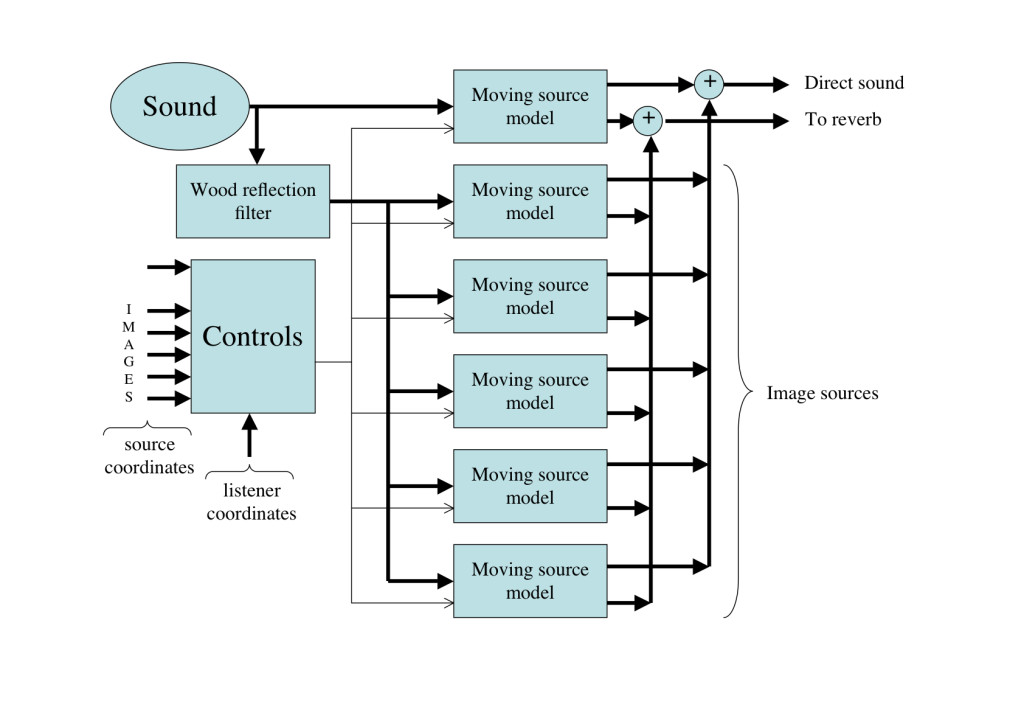 Synoptic scheme of the Leslie Simulator

First, download a zip file containing the Moving Sources abstractions. Then download the Leslie patches zip file. All these patches should be unzipped in a directory accessible with Max-MSP.

Simply take a Leslie abstraction, and feed it with an input signal in the leftmost inlet. The two leftmost outlets output the woofer and horn output signals. The rightmost inlet accept messages, such as “off”, “choral”, “tremolo” which are controls for the rotation speed.

The two rightmost outlets are phasors synchronized to the rotation speed, which can be used to control a spatialization system.

More messages can be input to control many parameters, see the “messages to Leslie” subpatch. 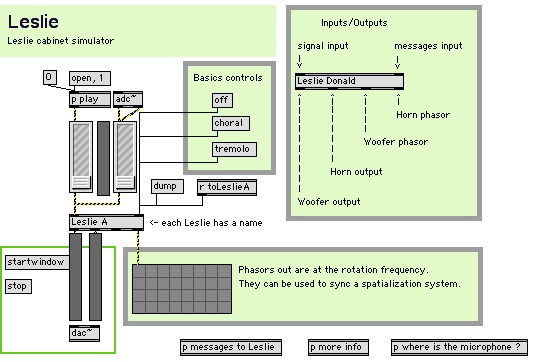 The following sound examples have been made with the Leslie Simulator. A short excerpt recorded from an Hammond organ (first example) has been feed trough the simulator. The second example is obtained with the simulator set in “choral mode” (slow speed), the third example with the simulator set to high speed (“tremolo” mode). Last example is an example of transitions from low to high speed and again to low, etc…
In these examples, the speed settings were :
RPM      slow   fast
Horn      43       390
Woofer  35       335

The examples are mono files, where the woofer part and the horn part were mixed together:

Some links about the Leslie cabinet

Leslie page on Wikipedia
On-line paper about the Leslie Cabinet