Closed environment, high temperature during summer, direct contact with other passengers during peak periods, traffic jams, etc. In certain situations, a bus trip can become highly stressful for the passengers who are forced to undergo their uncontrollable environment and the foreign discomfort. To reduce these problems, the idea here consists in enhancing the trip with spatialized soundscapes in order to virtually open the bus toward the surrounding space and to increase trip’s agreeableness.

Several studies have demonstrated restorative effects of natural compared with urban environments; these effects include increased well-being, decreased negative affects and decreased physiological stress responses [1,2,3]. In [2], Ulrich suggested that natural environments have restorative effects by inducing positive emotional states, decreased physiological activity and sustained attention. Considering the influence of natural sounds, a study by Alvarsson et al. [4] suggests that, after psychological stress, physiological recovery of sympathetic activation is faster during exposure to pleasant nature sounds than to less pleasant noise of lower, similar, or higher sound pressure level. Benfield et al. [5] highlight a better relaxation with natural sounds compared to no sound or to natural sounds mixed with human sounds (voice or motor). Watts et al. [6] describe the beneficial effects on anxiety and agitation of introducing natural sounds and large images of natural landscapes into a waiting room in a student health center. Other studies highlight the positive impact of music on stress reduction. In [7], the authors suggest that listening to certain types of music (such as classical) may serve to improve cardiovascular recovery from stress.

In order to reduce passengers anxiety and to virtually open the bus, the project aims at enlivening the bus trip with:

Soundscapes and POI are geolocalized and triggered when the bus passes close to their position on the route. For the POI, as in augmented reality, the sounds are virtually placed on the object they are representing, that is the POI sound appears to come from the POI position. Hence, when passing by a church, the passengers will feel that the tinkling of the bells come from the church (the sound spatialization is based on the POI position with respect to the bus). The soundscapes are constructed to reflect a particular atmosphere or universe in coherence with the route or the neighbourhood, to give an overview of typical sounds surrounding the city, or to offer a trip based on musical ambiances. For example, in a city close to the sea, soundscapes might be composed of sea sounds (waves, boats, wind, seagull, etc.), and in highly urbanised area forests’ sounds can be recommended. In addition to stress reduction, designed soundscapes will allow to divide the bus itinerary in several parts according to crossed neighbourhood and places. 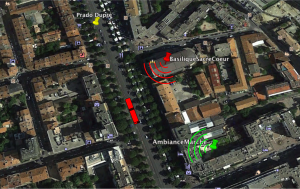 Soundscapes design is based on a random reading of the preselected sound samples in order to avoid redundancy that could annoy and tire regular passengers. With this process, on one part of the route, soundscape ambiance is always the same but the sound events doesn’t appear twice at the same time and at the same position. Sounds trajectory and frequency of appearance may vary as a function of the time of the day but also as a function of the traffic, the temperature, or the passengers number. It is also possible to design several similar soundscapes and to associate them to different periods of the week (morning or afternoon, week or week-end, for example).